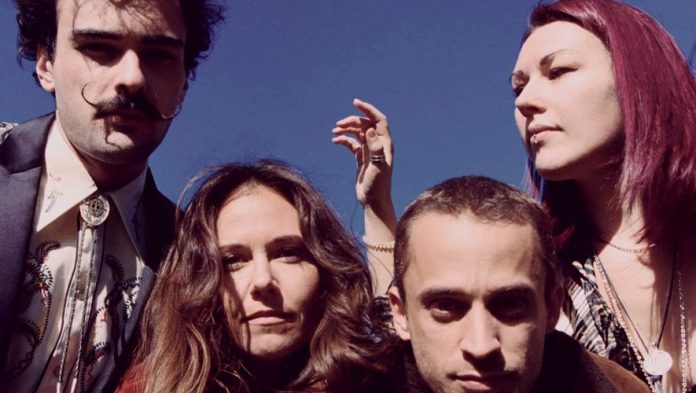 the essential
Voluptuous, Marina Anne Nolles is a velvet cushion placed on a fakir carpet. Soft voice over spicy lyrics, she takes center stage with MAN & The Maniacs. The group released their eponymous debut album on October 27, composed by the time of Covid in Malves-en-Minervois, near Carcassonne, in Aude.

Singer, she was already 4 years old. In the air of children, in the skin of Disney heroines who rocked an early age tossed between France and the United States. But already, also, with the desire to write his own texts, his own music. Marina Anne Nolles is now a singer-songwriter. Singer … the word annoys her because it is reductive, and indeed she is much more than that.
In 2014, his meeting with Toulouse singer-guitarist Etienne Zénone gave birth to MAN, his stage name, and in 2016 gave birth to a first … voluptuous EP: “Busy Man’s World”. A trip-hop with committed lyrics that will earn them to be programmed at the Electro Alternatives festival in Toulouse. “We did two years on the stage, had great experiences, good times, but the machines, the soundtracks, the buggy computers, that didn’t suit me at all. I’ve always wanted to start a band. , I always wanted to have the Maniacs, I dreamed them, I wanted them and I had them! “, she smiles.

“Something special, unique and wonderful”

With Romain Thorel (keyboardist, horn player), Arnaud Beyney (guitar, bass) and Elodie Longuemart (drums, backing vocals), she will form MAN & The Maniacs in Carcassonne in 2018. “From the start we had an incredible understanding, something special, unique, wonderful, “recalls Marina. “We did our first residency at the Fabrique des Arts – which fell right in the middle of the floods but we put on a nice show – then a lot of dates. In the summer of 2018, we arranged two compositions: Chemically Yours and The Lake. Vice-Versa, the accompaniment device for the current music of Performing Arts 11, allowed us to record them at the Condorcet studio, in Toulouse “.

The double single will be released in early 2020. “And there was the Covid. We continued to see each other, to compose at my place because we did not have a lot of money. As a project leader I was doing the exemptions for the movement of musicians “. A privileged time, she judges, that they would not normally have had to compose: “The first four days we created four pieces, in barely ten we had nine. It was dazzling! Everything was natural, obvious. The music we make today is what I always wanted to do. With the Maniacs I am in total confidence, I know that it will ensure, we have an invisible cord between our navels, the chakras that connect, we are in a sacred circle: if you throw yourself into the void, the others hold you! “.

A captivating and committed 1st opus

Recorded in December 2020, the album will be called “MAN & The Maniacs” – an eponymous title to sign the birth of the group – which will launch it on October 27 in digital on all streaming platforms. A captivating and committed first opus, roughly stripped, like the clip of the first single which is extracted from it, “You’re an Angel”, on the subject of violence against women. Fan of the Black Keys and the Alabama Shakes, MAN & The Maniacs has already opened for Clara Luciani at the Carcassonne Festival, Kimberose in Castres, and Angèle in Carpentras, in front of 4,000 people. From pop protest to voodoo rock and wah-wah guitar banquets, his nine new tracks follow on from beautiful ethereal beaches of psychedelic ecstatic flames. And there is this bass horn to throw his JB to the nettles, to send his Louise Attaque to the selective sorting, unheard of or heard in the hooked annals of groove (in our opinion). They carry the DNA messenger of MAN, Marina Anne Nolles: “There is something that interested me, it was the contrast between the way I sing naturally, which is quite sweet, and talking about very raw things, very hard. It’s a bit of a self-esteem that you have when you’re a woman, that you don’t have broad shoulders, an imposing physique and a big voice. Sometimes, in order to be heard, you don’t has no choice but to throw an ironic little spade, which will be more effective than raising your voice and shouting, ”she sums up.

Ecofeminism and the seventies

The author discovered ecofeminist texts two years ago thanks to “Sorcières”, a series of podcasts on France Inter. “I sometimes had ecological texts, sometimes feminists, it created a bridge between the two, it has a logic, it speaks to me. And it did me good to tell myself that I am not the only one to share this speech”. Emerging in the 1970s, ecofeminism is a movement that establishes interconnections between the domination of nature by humans and the oppression of women, minorities and animals by men, seeing these as stemming from a same capitalist patriarchal culture. “He analyzes our current society from this angle in order to change this culture, to invent new myths, new ways of functioning, of working together, to get out of this situation”, explains Marina, recalling the The massacre of violence against women every year.

“We shut down the computers, we come back to the real instruments”

This ecofeminism brings back as much to MAN as to the Maniacs, to a soul that is both very “seventies” and very modern. “The 70s are a time that inspires us, whether on a social or political level, and we also like the way of dressing, the music, the blues, the soul, the R’n’B. started composing during the first confinement, we said to ourselves we shut down the computers, we come back to the real instruments. It’s a bit of a throwback to the old days, a real bias, it united us as group. Since the Covid I no longer watch TV, I no longer listen to the radio. We all have cars, computers, phones, but we don’t want to get into this infernal dynamic and we wanted to make an album instead only Spotify formatted singles for that reason. We are backpedaling all these current social networks, which we are still obliged to use. We want to express things up and down, we could have done 12 songs on this album! “, proclaims MAN, who will now get down to the design of a booklet collecting his texts and visuals to put a cherry on the cake: “I would like to create a nice object to offer in merchandising. Goal Christmas, that would make a great gift! “.

The keys to ‘The Green Knight’: The adaptation of the Arthurian legend in a fantastic key that promises to be one of the films...

Jodie Comer: ‘It has been very empowering to give Margueritte a voice and honor her story in’ The Last Duel ‘”

The keys to ‘The Green Knight’: The adaptation of the Arthurian...

Jodie Comer: ‘It has been very empowering to give Margueritte a...