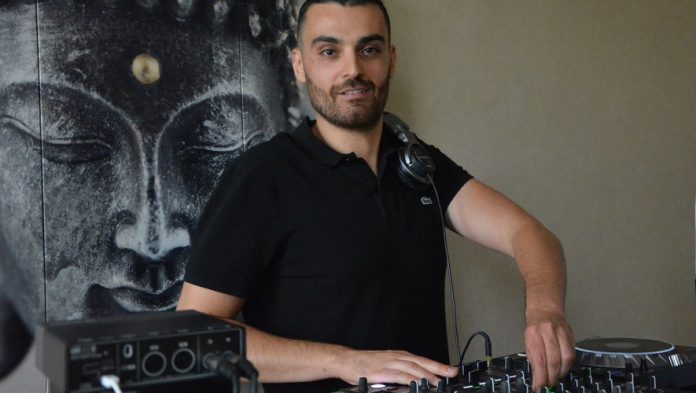 the essential
The young Tarn-et-Garonne DJ from Verdun-sur-Garonne has developed a concept allowing deaf or hard of hearing people to enjoy electro in front of and behind the decks. Meet.

Techno music for deaf and hard of hearing people. The concept has something to question, even surprise at first glance. Yet this is the challenge that Romain Mesama has launched. A little over a year ago, in full confinement, the young man of 29, then an employee in a large DIY store, made the choice of professional retraining and turned to his passion: music.

In the family home in Verdun-sur-Garonne, Romain’s old bedroom quickly turned into a small studio. This is where the DJ will “work on his mixes”, develop his technique and his own sound. With one ambition: to make everyone dance. “In the world of electro, deaf or blind people are a forgotten public. I have always considered it an injustice, regrets Romain. So I said to myself, we must find a way to integrate them, so that ‘we can party together. “

The idea of ​​”Techno pour tous” was born. It then remains to develop the concept, in front of and behind the decks. But with his five senses, Romain immediately came up against a major problem: how to put himself in the shoes of a person who cannot hear? “All the feeling goes through the vibrations. So I started from this observation to develop new ways of mixing”, explains the DJ.

By taking inspiration from an existing technology but not very affordable for the general public: the “vibrating vests”, which make it possible to feel the bass at the level of the bust. Romain will reproduce the principle using two helmets, strategically placed on the chest, heart side and shoulder side. “Each headset will broadcast a sound track. Placed in this way, they will allow me, using the vibrations, to set the two tracks on the same rhythm for a proper transition of the set”, he explains. On the console monitors, the oscillations also provide valuable information to “harmonize” the whole without relying on hearing.

In terms of making music feel for an audience of the deaf and hard of hearing, Romain approached Emma Dirat, a sign language translator. “On stage, performers can sign the words of a song but not the music. With techno, you have to manage to translate music without words”, continues the young DJ.

The stake here is to succeed in setting up a visual coding allowing to transcribe the sounds, by relying on a system of lights fixed on the tempo of the track. “To give an idea of ​​the rhythm and the cadence, I am already moving according to the beats per minute of the track. It is a work on the gestures, continues Romain. With Emma, ​​we try to go further by“ scripting ” music through gestures. “

For the moment, Romain has shared some videos of his demos on social networks. The feedback is good and allows the Tarn-et-Garonnais to refine his technique. Next step: a life-size test in front of an audience, with the ambition of mixing for everyone very soon in clubs and at festivals.

Bagnères-de-Bigorre. A fanfare start to the season at the Alazic with the Cartel

Jason Reitman, the director who continues the family legacy: “Ghostbusters’ has been a part of my life for as long as I can remember”

Bagnères-de-Bigorre. A fanfare start to the season at the Alazic...

Jason Reitman, the director who continues the family legacy: “Ghostbusters’ has...

‘Spider-Man: No Way Home’: You can now get your tickets to...

Finally there is a trailer for ‘And Just Like That’: Carrie,...

A web series to make children aware of the importance of...