In recent months, we have seen the name of Legacy of Kain Y soul reaver as if twenty years hadn’t passed since his last video game. Why is there such a big gap in this beloved saga? Part of the answer is, without a doubt, one of the most relevant canceled games in memory. And I say relevant because the ambition of Legacy of Kain: Dead Sun and the amount of footage we have about it left its fans, myself included, with such a void that it seems like we were the ones thrown into the Lake of the Dead, hoping someone would find this saga valuable again.

Like a ghost, this phantom game lives on, about which we now know more details thanks to the statements of its director, Sam Barlow. Yes, the same Sam Barlow who now signs very different games like Her Story, Telling Lies and the recent immortality. After a decade since its cancellation, the designer has revealed how some stages of this convulsive development were, as well as its cancellation. But before meeting them, what was, or was to be, Legacy of Kain: Dead Sun?

Undoubtedly, a very original and ambitious production for the time, even if it did not obey triple A status. Climax in charge of its development after his good work with Silent Hill: Shattered Memories, had planned a game that was in the spirit of Soul Reaver, the game they were really in love with, even if they had to use the name Legacy of Kain. Thus, we would have incarnated a murdered man who has been trapped in the body of his murderer: an eater of souls, capable of conversing with him who follows him wherever he goes.

The game featured large environments to explore, with moments of action, platforms and puzzles. A very Zelda formula. It had a peculiarity: the ability to change kingdoms in order to advance. Feature inherited from Soul Reaver, but here it was expanded since we could use it at any time, giving rise to more challenging and skill-based puzzles. When I saw the footage for the first time, the truth is that it seemed surprising to me, since this change was done in real time with a very attractive effect and at the player’s will. And yes, although I was never completely convinced by the character’s design, I think there were things in this Dead Sun that were very innovative at the time and that in the end we have ended up seeing in other games.

Barlow himself mentions in a recent interview for the portal Time Extension who was very surprised when he saw the free climbing system of The Legend of Zelda: Breath of the Wild, something that also provided (on a smaller scale, I might add) this Dead Sun. “I’m glad Nintendo made Zelda: Breath of the Wild, because that was basically the game we were making on a mechanical level. One of our main goals was, ‘Hey, let’s make a Zelda-like game where you can climb anywhere. And we tried. So when I played Breath of the Wild, I was like, ‘Shit, Nintendo has 100 per cent nailed this.’ It’s the best version of what we put forth, so good for them. Just without the vampiric and strange sexual parts”. I think the inspirations for this game have been many. In fact, there are some things in this canceled game that also remind me of what was later seen in titles like Middle-earth: Shadow of Mordorlike that feature of having two characters stuck in the same body, large and desolate landscapes.

Why was Legacy of Kain: Dead Sun cancelled?

If it looked so good, why was it cancelled? I guess we could say it was their fault the trend changes of the time. and also the Square Enix of the time. Simply, what Climax wanted and what Square-Enix wanted were different things. While Barlow’s team was focused on making an ambitious but modest game, the Japanese was seeing how the world of modern video games turned into a spectacular, colorful and action-packed trend with games like god of war, Assassin’s Creed either Uncharted.

So while Climax wanted a slower exploration with scenarios that gave the sensation of large desolate places to explore little by little, the pressures of the study were towards resembling this type of game. Instead of valuing a puzzle made with a broken bridge and the change of kingdoms, they wanted the bridge to be bombarded after you passed with a bunch of explosions. Yes, in a fantasy medieval vampire game.

The producer pushed hard to have an animation system as realistic as that of Uncharted, while, in turn, wanted the base of the game to be the current generation, that is, Xbox 360 and PS3, instead of the following consoles, making the challenge more difficult. He even completely changed the name of the game, which wanted to have the name of Soul Reaver instead of Legacy of Kain, and that it was not presented as Dead Sun (Barlow alludes to the fact that the sun was not dead, but hidden under ash by vampires to be able to go out during the day), but as Savage Messiah.

What ended up killing the game completely was the imposition of having a multiplayer mode.

But what ended up killing the game completely was the imposition of having a multiplayer mode, something that was the antithesis of what Legacy of Kain represented, a single player adventure with deep lore. The technology created was not well suited to this mode, so it was commissioned to the studio Psyonix (which would later create the success Rocket League) and it is the game that ended up seeing the light as nosgotha game that had nothing to do with the spirit of the franchise. 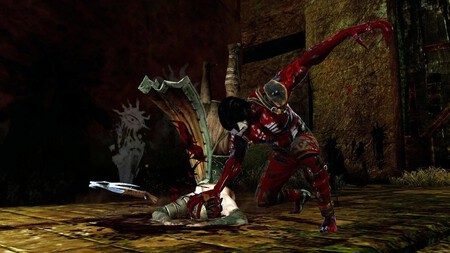 In the end, the pressures of a Square-Enix that wanted something like what it ended up doing with the tomb Raider of 2013, the obsession with multiplayer and games as a service and the abandonment of AA productions is what ended up with this very interesting game. Barlow is convinced that all the work they had done on the game script and world building would add a lot to Embracer Group in his new desire to rescue the franchise, but he doubts that they will take advantage of it. In any case, the news is now more hopeful than ever and more than likely we will see a new installment of the Legacy of Kain franchise in the coming years.

the giant behind Marvel, Avatar 2 and Star Wars also joins the growing wave of cuts